Memphis Says NO MORE, the local multi-media messaging campaign to end domestic violence and sexual assault, has rolled out a new fleet of MATA buses with signs aimed especially at teens and youth, men and Spanish-speaking residents. 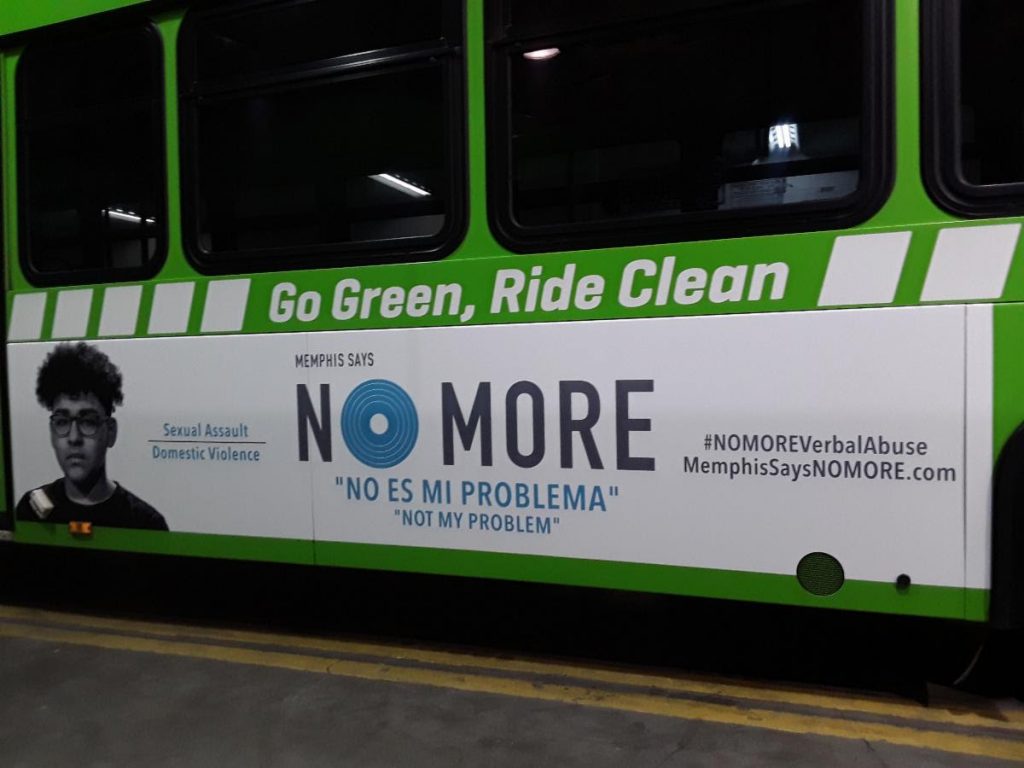 A sample bus will be parked Tuesday, March 10, at 600 Jefferson for a 4:30 p.m. press conference.
Deborah Clubb, MSNM coordinator and executive director of the Memphis Area Women’s Council, and other campaign leaders and partners from the Memphis Sexual Assault Kit Task Force will be present.

Memphis Says NO MORE seeks to change attitudes and behaviors around gender violence while connecting survivors to help and resources. With support from a local funder, the national NO MORE campaign was localized in June 2015 as part of the Memphis task force response to testing and investigating stored rape kits. This is the second campaign using MATA buses; the first featured faces of the Grizzlies’ “core four” of Tony Allen, Mike Conley, Marc Gasol and Zach Randolph.

Videos, PSAs, local voices and local resources are available on memphissaysnomore.com. Thousands of posters, buttons, info cards and stickers have been distributed and supplies are available for everyone — schools, businesses, clinics, faith communities, gyms, offices, clubs and workplaces. More information can also be found on nomoreverbalabuse.org.

To ask about materials and arrange supplies, go to memphissaysnomore.org/contact-us. For more information contact Deborah Clubb at 901-378-3866 or dclubb@memphiswomen.org.

How Memphis communities can respond

Domestic Violence Victims in the Workplace

Read the latest news and updates.

Speak out when you see behavior that enables and encourages violence. Every action matters, because when it comes to ending domestic violence, #ChangeHappensHere. #MemphisSaysNOMORE

Learn more about Memphis Says NO MORE and what we are doing in Memphis.